Science is Fiction – Film and Photography

Galerie Berinson presents Science is Fiction: Film and Photography, which includes, for the first time in Berlin, the films and photographs of French filmmaker Jean Painlevé, who single-handedly pioneered scientific marine documentary films of aquatic life.
The show features more than 30 vintage photographs from the 1920s and 1930s, emphasizing Painlevé’s distinctive role in photography, but also includes several examples of his films.

Photographer, author and filmmaker, Painlevé tread the line between science and the artistic avant-garde. As the son of the well-known mathematician, Paul Painlevé, he was exposed to science from a very young age and was fascinated by biology and wildlife. After abandoning his medical studies, he began making scientific movies.
In the early 1920s, he developed a technique to make underwater movies, but due to poor results, he decided to move his camera into a laboratory. Depending on the audience, Painlevé often made several versions of a single film, catering to the scientific community, academia, or the general public.

He produced both silent and talking movies with a penchant for the absurd and comical, featuring his own vocal commentary and accompanied by jazz, orchestral or serial music.
He commissioned Darius Milhaud to write a score for his famous film, L’ Hippocampe (The Seahorse). The great innovator he was, Painlevé produced more than 200 films between 1920-1980, many of which deal with the beauty of the underwater world. His last show took place in 1933 at the Galerie de la Pléiade with photographer Laure Albin-Guillot.

From the 1920s on, Painlevé’s photography developed alongside his filmmaking.
His photographs mirrored the aesthetic of his films and found an enthusiastic echo from the avant-garde, including Surrealists Man Ray and Luis Buñuel. Man Ray borrowed scenes from Painlevé’s work for his film, L’ Etoile de Mer and Georges Bataille published Painlevé’s picture, Pince de Homard in his magazine, Documents.

Jean Painlaivé’s contribution was not only to science, but also to art through the mergence of both fields. With the inclusion of humor and lyricism, Jean Painlevé’s blend of science and art makes him one of the most important figures of scientific avant-garde filmmaking. 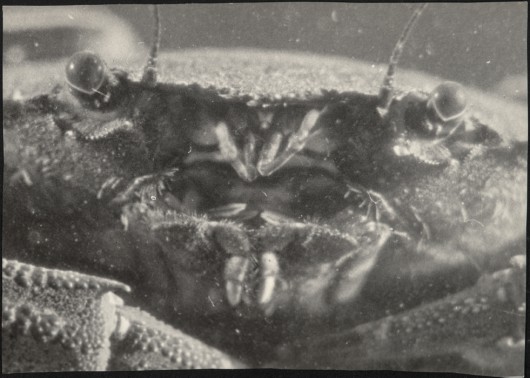