Views of Berlin around 1875 | Photographs from the Panckow Studio


The Panckow Photographic Studio was listed for the first time in 1864 in Berlin, but ceased to exist by 1883. The primary subjects of these works are public and private buildings, as well as cityscapes of the heart of Berlin in 1871, the year the Reich was founded and Berlin became the imperial capital. This “Gründerjahre” period is one of rapid industrial expansion during which Berlin grew to over a million inhabitants.
The photographs from Studio Panckow afford a fascinating look at a bygone era that today exists only as a memory. Sites that one may recognize include the Alsenbridge and the Lehrter Train Station – just finished; the Stock Exchange at the Spree river built by Georg Friedrich Hitzig; the Opera Square with St. Hedwig’s Cathedral; and the new Synagogue on the Oranienburger Street by Eduard Knobloch.
In addition to inner city structures, Studio Panckow photographed many just finished villas cropping up on the outskirts of Berlin, thus becoming known as “the chronicler of new buildings.”
(Literature: Janos Frecot, Berlin und Potsdam, Architekturphotographie 1872–1875, Schirmer / Mosel Verlag, München 1980) 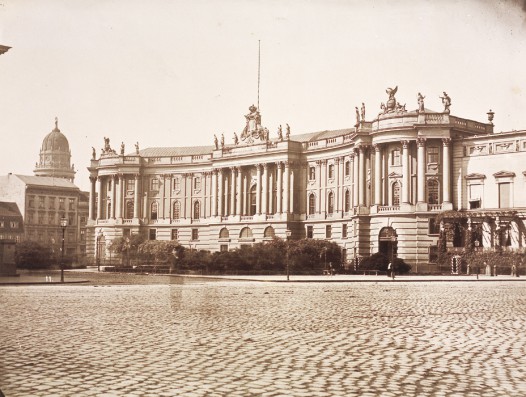