Lisette Model, born in 1901 as Elise Amelie Felicie Stern in Vienna, is considered as one of the main figures of modern art photography. Her work influenced photographers such as Diane Arbus, Larry Fink or Nan Goldin.

Lisette Model enjoyed a luxurious, multilingual education and showed early interest in music. From 1920 on she studied music with composer and painter Arnold Schöneberg, who was her childhood friend Gertrude’s father, and singing with Marie Guntheil-Schoder in Vienna at the private Schwarzwald school. After her own father’s death, the family moved to France in 1926, fluctuating between Paris and Nice.

First, she continued her singing education in Paris, but decided in 1933 to become a photojournalist. One may only guess why Model decided to end her music career: maybe she thought she would never earn enough credit, was tired of music, or felt pressure to have to learn a trade to earn money. Even she neither disclosed the reason. Models younger sister Olga, herself a professional photographer, brought her the first steps. Also her friend and photographer Rogi André, André Kertész’s wife influenced her and showed her the handling of special reflex cameras.

In 1934 Model made her best-known photo series of the noble vacationers at Nice’s Promenade des Anglais, which 1935 appeared in Regards with a social-critical commentary, a magazine of the Communist Party. This series was criticized, but also brought immediate recognition to important photographers such as Berenice Abbott, Anselm Adams and Edward Weston.

In Nice she met the Russian painter Evsa Model, whom she married in 1936. Together they emigrated to the USA in 1938 where Model had contact with influential personalities such as Alexei Brodovitch, the art director of Harper’s Bazaar, or the photographers Ansel Adams and Berenice Abbott. In 1940 the Museum of Modern Art in New York bought first photographs of Lisette Model and exhibited them in a group exhibition.

Until 1952 Model worked as a freelance press photographer, her works were regularly published in Harper’s Bazaar, Cue, PM Weekly or Cosmopolitan. She photographed in New York’s bars, hotels and luxury restaurants, on the beach of Coney Island, the streets of Paris and Nice as well as on exclusive fashion shows. Also formalistic works such as the shop window reflections and running legs emerged. In 1952, she began a jazz photo series, portraying Louis Armstrong and Ella Fitzgerald among others.

In the mid-1950s, Model turned away from active photography, as American authorities ascribed communist activities to her, prevented new commissions, and paralysed her work. In 1949 she began to teach photography at the California School of Fine Arts and from 1953 at the New School for Social Research in New York City until her death. Her most famous students were Diane Arbus and Bruce Weber. 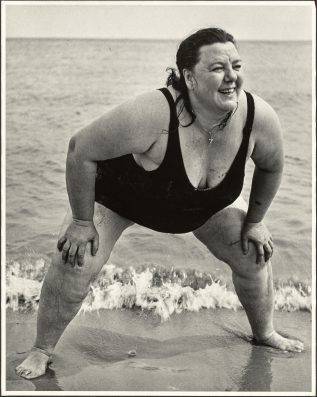