Galerie Berinson presents a large exhibition with works by the important but somewhat forgotten photographer Ilse Bing featuring more than 30 vintage prints from the 1930s to 50s, her time in Paris and New York.

Ilse Bing was an notable photojournalist and commercial photographer of her time. She is known for her pioneering photographic techniques, and for being among the first to use electronic flash and to experiment with solarization technology. She focused on details and unusual perspectives.

Born to a wealthy merchant family first studied mathematics and Bing first studied mathematics and physics in Frankfurt, later art history at the Kunsthistorisches Institut in Vienna. During her dissertation she purchased a Leica camera for documentation purposes and discovered her passion for photography. In 1929 she dropped out of college and worked as a photographer – that she teaches herself in self study. With the Leica, this then new, handy and relatively small camera, Bing found her characteristic mixture of abstract form awareness and snapshot.

Although she was entirely self-taught, she soon received initial assignments for reports, e.g. from the weekly newspaper Das Illustrierte Blatt on the production of cider or on bicycle races.

From 1930, Bing lived and worked in Paris, where her work was exhibited alongside contemporaries such as André Kértesz, Brassaï and Man Ray. Further publications in German, French, and later also American magazines such as Vogue and Harper’s Bazaar supported Bing’s recognition as a professional and artistic photographer. 1932 Julien Levy Gallery exhibited her work alongside modern European photographers such as Moholy-Nagy, Tabard, or Henry, and Bing became finally known internationally as a photographer.

In 1936, she was invited to New York City by Gallery June Rhodes and immediately touched by the city. Many of her most famous photographs were made during that stay.

In 1941 Bing and her husband, the pianist Konrad Wolff, emigrated to the United States. Her photographic activity gradually subsided. After 1959, she devoted herself only to poetry and drawing.

Ilse Bing died in New York at the age of 98. 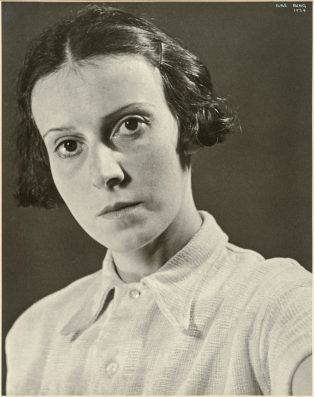