Galerie Berinson presents selected works from constructivist Günter Fruhtrunk, whose large-scale paintings are now shown in Berlin for the third time only since his retrospective at the Neue Nationalgalerie in 1993. His works of colorful stripes, diagonals and lines are part of numerous collections and museums, such as the Paris Centre Pompidou, the Kunstsammlung NRW, the Munich Lenbachhaus or the Neue Nationalgalerie in Berlin.

After his high school degree Fruhtrunk studied architecture at the Technische Hochschule in Munich, but gave up after two semesters to join the army as a volunteer during World War Second. He suffered severe injuries, and could only alleviate his lifelong pain with severe drugs.
Already during the war, Fruhtrunk began to draw, especially landscape motifs. From 1945 to 1950, he studied privately under the painter and printmaker William Straube, who was a student of Adolf Hölzel and Henri Matisse. Fruhtrunk had his first solo exhibition in the gallery Der Kunstspiegel in Freiburg in 1947.

In 1948 het met Willi Baumeister, in 1949 Julius Bissier, who both introduced him to non-objective painting.
After several inspiring study trips to Paris since 1951, he moved to Paris in 1954, after having received a scholarship from the State of Baden-Württemberg and the Gouvernement Français in the same year. In Paris, he worked in the studios of Fernand Léger and Hans Arp. The lasting influence of both artists led Fruhtrunk to Concrete art.

In 1961 he received the Prix Jean Arp in Cologne and in 1966 the silver medal of the Prix d’Europe in Ostend.
In 1963 he made his breakthrough in Germany with a first major exhibition at the Museum am Ostwall in Dortmund.
From 1967 Fruhtrunk was Professor of Painting at the Academy of Fine Arts in Munich. In the same year he received the Burda Prize for Painting.

His participation in the documenta 4 in 1968 marks his status as an artist of German art history after World War Second. In the same year he also participated in the 34th Venice Biennale.

His best-known work is the plastic bag design for Aldi-Nord from 1970, which has been distributed millions by now: white stripes on a blue background. But this was less conducive to his career, since in the early 1970’s the proximity of art and commerce was considered disputed.

Fruhtrunk committed suicide in his studio at the Munich Academy of Fine Arts in 1982. 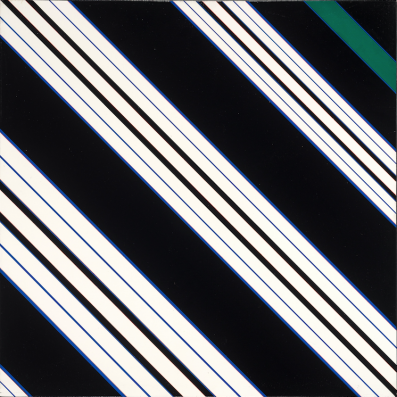