Nappelbaum’s career began with a craft apprenticeship in Minsk, after which he travelled throughout Russia and the United States. En route, he garnered impressions of photographic modes and methods then, after a visit to the Tretyakov Gallery in Moscow, claimed Rembrandt as his true master. Nappelbaum first settled down as a photographer in Minsk, before moving with his family around 1910 to Saint Petersburg, where he opened his studio on Nevsky Prospect.

In 1918 Nappelbaum took the first official portrait of Lenin – an image distributed by the million – then exhibited his work at the Anichkov Palace in Saint Petersburg: two steps that sealed his reputation. His portrait studio quickly became the venue of choice, not only for his usual clientele but also for politicians, scientists, painters, sculptors, poets, composers and actors, all avid to be immortalized.

Nappelbaum developed a personal style impervious to fashions and fads, which he maintained throughout his career. He created portraits meticulously, often at sittings that lasted for hours. Consistent lighting, a generally sparse use of props and the particular attention Nappelbaum paid to his sitters’ hands and line of gaze gave rise to sensitive, finely composed character studies. Nappelbaum approached his prints from a painterly perspective, retouching background areas of the negative plate as if it were canvas – a striking characteristic of many of his works.

Nappelbaum created the definitive portraits of the new Soviet elite. Like Hugo Erfurth’s portraits of artists and scholars in Germany, Moissej Nappelbaum’s portraits captured the image of an era in Soviet Russia. They attest to his standing as the incomparable chronicler of his time.

An exhibition catalog is forthcoming. 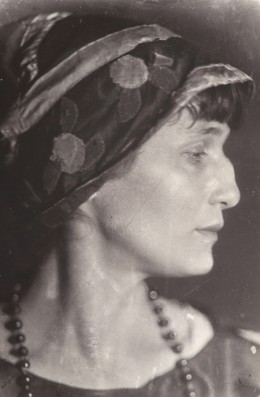