The Lithuanian school of photography


Galerie Berinson presents a representative cross-section of Lithuanian photography from the 60s and 70s by showing 71 masterpieces in black and white from twelve Lithuanian photographers. The works are photographic reports from a social, political and artistic epoch – everyday life under and beyond socialism.

Amongst the selection of works we are showing photographs by three of the most influential photographers from Eastern Europe: Vitas Luckus (1943-1987), Aleksandras Macijauskas (*1938), and Antanas Sutkus (*1939) who is honored with the Dr. Erich-Salomon-Award from the German society for Photography (DGPh).

Lithuania’s history of photography is shaped by both, the influences from Western Europe and the Soviet cultural context. Between 1945 and 1991 a narrative- descriptive reporting photography developed – known as the “Lithuanian photography school” in the history of photography.
The photographers concentrate on a personal and realistic depiction of everyday life.  The fundamental loci of life are central – one’s homeland, the market place, the countryside. Their works withdrew from the largely anonymous and ideologically influenced photography scene of the Soviet Union and became a kind of subtle social criticism that focused on the profane and simple subjects. 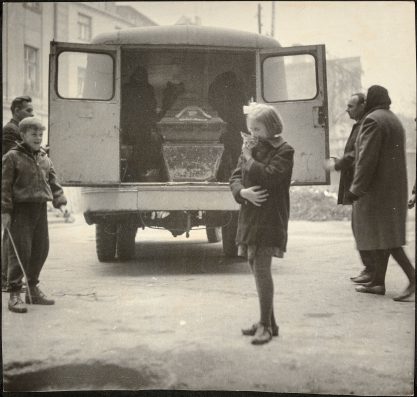