Heinz Hajek-Halke was among the most important German photographers of the 20th Century. Born in 1898 in Berlin, Hajek-Halke lived in South America until he was thirteen years old, returning to Germany in 1911. In 1915, he undertook the study of painting at Berlin‘s Königliche Kunstschule, and made his first experimental artworks. He completed his studies after World War I. Hajek-Halke began his professional career as a poster designer for a film company, and went on to work as a printer, draftsman, and editor. In 1924, he made his first photographs, which stimulated new expressive work, including collage and photomontage. Hajek-Halke‘s work was interrupted again by the outbreak of the World War II, which prevented him from working regularly until 1947. Following the war, Hajek-Halke joined Otto Steinert‘s „fotoform“, and in 1955 began teaching graphic design and photography at the Hochschule für Bildende Künste (Academy of Fine Arts) in Berlin.

During his lifetime, and in the immediate years following his death, Hajek-Halke was well-known in the arts community, but remained somewhat more obscure to the general public. Among his most important works were his experimental ‘Lichtgrafiken’ (light graphics), which were made without a camera. Instead, each image was created by applying a combination of chemical and mechanical techniques to photographic materials, such as negative film and light-sensitive paper. Additionally, Hajek-Halke used materials such as glass shards, glue, varnish, soot, wire, and fish bones in concert with darkroom techniques such as montage and double exposure, resulting in images of bizarre and fine structures and shapes, some resembling macro- and microscopic photographs.

The term „Lichtgrafik“ was coined by the art historian Franz Roh on the occasion of the exhibition „Subjektive Fotografie“ in Saarbrücken in 1951.

Heinz Hajek-Halke died in 1983 in Berlin. 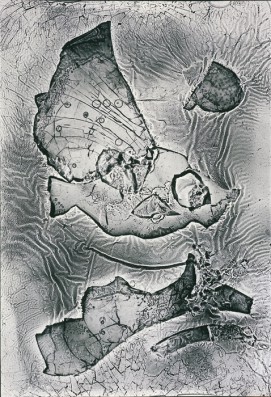