‘I want to open eyes.’
Josef Albers pursued this goal consistently. For decades he worked on variations on a single image – the Homage to the Square. His credo was to attain the utmost expression from the most minimal means of design. Albers endeavoured to make the viewer doubt his perceptions and encouraged him thus to see things more precisely. Within the unchanging parameters of the square image format in his famous series Homage to the Square, he explored chromatic interaction by alternately employing stark contrasts and subtle, barely perceptible nuances. The interplay of colours changed, depending on the setting, as did the impact on the viewer of colour and composition – so much so, at times, as to contrive in his paintings the illusion of movement and dynamism.

The works shown here offer insights into different creative phases. Be it in the graphic series Structural Constellations, which attests to Albers’ preoccupation with the vigorous interaction of visual frames and imaginary space, or in Homage to the Square, his exploration of the effects of colour, Albers remained devoted to his on-going quests for variation on a fundamental principle.

His influence on modern European and North American art is rooted not only in his outstanding work but also in his activity as a teacher and lecturer in Germany and the United States. Josef Albers sought to connect theory and practice in his teaching and demanded, here too, ‘maximum effect with minimum effort’. He successfully fostered understanding both of the fundamental laws of design and their practical application. His innovative courses at the Bauhaus and – after having migrated to the USA in 1933 – at Black Mountain College and Yale proved formative for generations of young artists. He demanded that his students read form with great sensitivity and, in particular, that they pursue their artistic development with discipline and self-reliance. Consequently, several independent and unique artists such as Robert Rauschenberg, Kenneth Noland, Donald Judd, Eva Hesse and Richard Serra number among his former students.

Galerie Berinson is presenting numerous paintings, drawings and prints – in Berlin, the first comprehensive solo exhibition of the work of Josef Albers since 1988.

‘Paintings, Drawings, and Prints…Oh My!’
by Jackie Smith
> See article 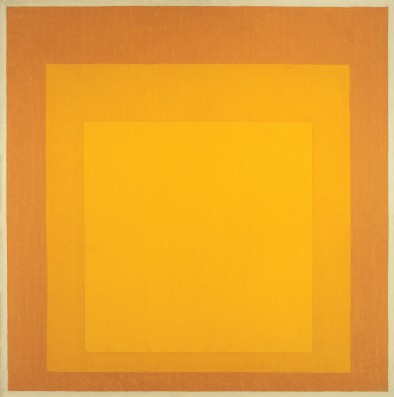