„Yes, I have principles, but I change them.“
(Meret Oppenheim)

Galerie Berinson commemorates the Berlin-born artist Meret Oppenheim’s 100th birthday with a solo exhibition. Meret Oppenheim started her career with the surrealists in Paris and was acquainted, among others, with Max Ernst, Man Ray and Hans Arp. In Paris, she created the fur-covered teacup, Object, which made her famous overnight. This exhibition highlights the versatility of this artist with sculptures, objects, graphics and editions.

The playful and humorous association with everyday items, interpreted in constantly new connotations, is characteristic of her work. Of note, her amusing and fantastic jewelry designs, like the Ring with Sugar Cube (draft in 1936-37, realisation in 2012) exhibited in the gallery, flout convention. In this way she created her own realistic yet fictive world. In similar ways she also deals with the critical socially constructed gender role at her time. In Oppenheim‘s opinion, however, art should have no gender. Her art at times reflects a lack of male-female polarity. The vintage print X-Ray – Selfportrait from 1964 contains a skull characterizable as neither male nor female. Yet she evinced strong femininity in her choice of jewelry.

One of the other highlights of the presentation are the magical sculptures from her little-known late artworks; for example Squirrel (1960), made of a beer glass and fur and Six Little Primeval Animals and a See Snales Shell (1962), which could be characterized as animal-like metamorphosis lying somewhere between nature and culture.
Numerous sketches and models of objects and sculptures which were rarely realized also form an important part of Meret Oppenheim‘s Œuvre. One such work, Hermes Fountain, was molded by her in 1966 and posthumously made into an edition of six copies in bronze. A fountain designed with two snakes, plants, and a small man are dreamily combined in her surrealistic pastel-painted drawing of the same title.

Our exhibition offers the opportunity to admire the artist‘s diverse range of works throughout her artistic career. The price ranges from 300 Euro (e.g. an offset) upwards. 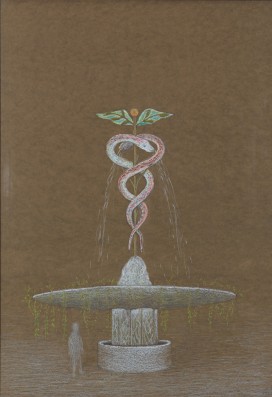