Polish Avant-Garde Filmmakers. Films, Photograms and Photomontages from the 1930s

Galerie Berinson is pleased to present an exhibition of the Polish artist couple Franciszka (1907-1988) and Stefan Themerson (1910-1988). Among the most influential experimental avant-garde filmmakers in Eastern Europe, the exhibition is devoted to the Themersons’ surviving vintage prints, photograms, and photomontages from the pre-World War II period.

Franciszka and Stefan Themerson, who met during their studies, experimented early on with photograms and developed their own technique. Stefan invented an animation stand on which he created photograms by moving light and objects on translucent paper above a glass shelf. While Franciszka arranged the objects and took care of the lights above, Stefan, lying beneath the shelf, photographed the images from below, frame by frame. ‘Photographed photograms’ was an innovative technical experiment which they employed in their films, garnering comparison to artists such as Man Ray and László Moholy-Nagy.

The couple made five short films in Poland during the mid-1930s: “Apteka” (Pharmacy, 1930), “Europa” (1931/32), “Drobiazg Melodyjny” (Moment Musical, 1933), “Zwarcie” (Short Circuit,1935) and “Przygoda Człowieka Poczciwego” (The Adventure of a Good Citizen, 1937), which is the only one that survived the war. The film is about two men carrying a wardrobe through the city streets, sometimes even backwards. It was “The Adventure of a good citizen”, that inspired director Roman Polanski in the 1950s (“Two Men and a Wardrobe”).
The Themerson experimental film will be shown in its full length in the gallery. The exhibition will revive the other lost pre-war films by presenting still frames, photograms, and photomontages.

While in exile the Themersons took a key role in the Polish avant-garde. Their contribution to the arts was not only to advance film as a new artistic medium but also the establishment of their own press (“Gaberbochhus Press”) in London, where they later resided and published. Franciszka and Stefan Themerson remain an intellectual attraction as publishers, painters, innovative filmmakers, and art theorists. 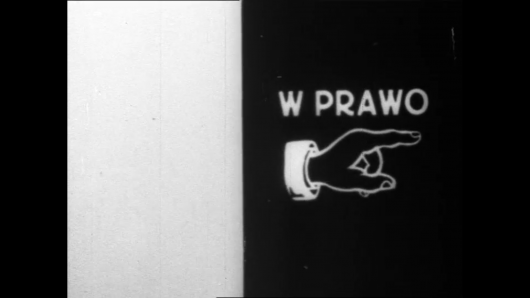 Film clip from Przygoda Człowieka Poczciwego [The Adventure of a Good Citizen], 1937